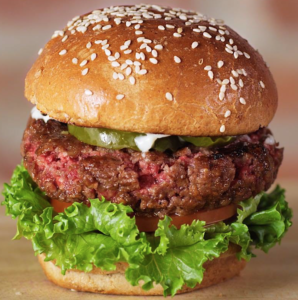 But logic fails sometimes when science weaves its tangled web to deceive. The new Impossible Burger, created by Impossible Foods (hence the name) is surprisingly possible. While PETA has denounced Impossible for performing live animal testing, the Impossible Burger “meats” all the above requirements while being purely vegetarian in nature. We hesitate to call it vegan, due to the animal testing, but it’s definitely made of completely plant-based components.

Which opens up a lot of questions, like, “How do we label Impossible Burgers when they hit the genera l market?” Obviously we’ll need tough freezer labels, since the product will need to be refrigerated and frozen, but otherwise, do we label them with vegetable labels or meat labels or what?

This is no simple matter. Apparently the active ingredient, besides the base protein (mostly soy,) is something called heme. Heme is a naturally red chemical that’s the most important component of hemoglobin, the molecule in red blood cells that locks onto oxygen and carries it to every part of your body to help fuel the meat machine that is you. Impossible Foods has discovered that heme gives cooked meat its unique flavor and smell. The heme they use is derived from plants—specifically, the leghemoglobin found in, you guessed it, soy plants. No animals are killed in the making of an Impossible Burger.

However, in restaurants where they’re made on dedicated vegan/vegetarian food prep lines, or for home consumption, Impossible Burgers may be perfect for vegetarians craving meat. Diehard vegans aren’t likely to eat them due to the animal testing, and the folks who have gotten so used to vegetarian diets they hate of the taste of meat aren’t going to eat ’em no matter what. For them, the problem is that Impossible did their job too well!

Still, we can’t wait until they’re on the open market, so we can start helping people label them. They should hit about the same time that lab-cultured “sheet meat” hits the market in a big way, so we can compare and contrast. Maybe by then we’ll have figured out where we should use veggie labels or meat labels for Impossible Burgers and similar products.