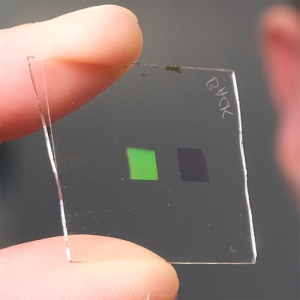 Whenever someone invents something that other people love, someone else will eventually offer a counterfeit version for sell, often more cheaply. This was the central issue that sent the tiny Duchy of Grand Fenwick to war in The Mouse that Roared: a fake version of their signature wine and only export. As you might imagine, people all over the world have been counterfeiting good booze for pretty much as long as other people have been selling it. All it takes is a lack of ethics and a source of halfway decent labels. That’s one reason we always make sure the people we make our beverage labels for are on the up and up.

Recently, scientists at the University of Glasgow in Scotland grew so concerned about the counterfeiting of proper Scotch that they invented an artificial tongue that uses 500 “taste buds” made from aluminum and gold to determine the chemical content of any liquid placed upon it. The electronic tongue proved to be so sensitive that it could tell the difference between not just various brands of Scotch, but also the difference between Scotch aged to various lengths of time, and even the difference between batches from different barrels! In addition to detecting counterfeits, the tongue can be used to guarantee that any Scotch whiskey meets the industry’s tough standards, so that the bottle labels are fully accurate.

The inventers of the “tongue” were quick to point out that it could be used to test the quality of just about any liquid, including water supplies, various chemical agents, and presumably even formerly liquid or semi-liquid and frozen snacks and other types of alcohol. So if you wanted, you could check your favorite vodka before you put it in the freezer, assuming you have the appropriate freezer labels on the bottles. And in truth, the point of the testing is to test not just the booze, but the labeling. It’s too easy to label low-quality alcohol as better quality types, or even just refill old bottles, so unscrupulous producers can steal the fame of the better product and make more money.

Needless to say, aficionados of a particular liquor will be able to taste the difference, but casual drinkers, or those who’ve never had a top-notch Scotch or vodka, may be fooled. That’s what the counterfeiters count on. But now that we have an unbiased artificial tongue to help us, it probably won’t be long before random testing of all batches is required — and special beverage labels proclaiming the brand’s genuineness are required.

But Seriously, How Does an Impossible Whopper Taste?
November 7, 2019