But Seriously, How Does an Impossible Whopper Taste? 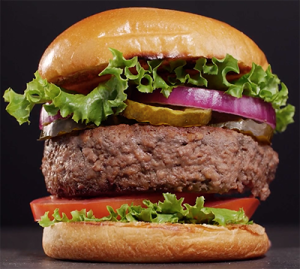 Back in May, we alerted you to the fact that Impossible Foods, which makes soy-based burgers that (by all reports) taste like the real thing, had rolled out the Impossible Whopper at 61 locations in St. Louis, Missouri. Well, the burger is in nationwide distribution now, so we decided to have someone familiar with the taste of regular Whoppers try this new kind.

Our conclusion: the previous reports are right. Our tester (who is not a vegetarian, unlike our illustrious founder) tried one, and couldn’t tell any difference between it and the meat burger. This is a case where the freezer boxes the Impossible Whoppers are shipped in will need very accurate, easily readable freezer labels so the fry cooks don’t mistake the meatless Whoppers for the original kind, and vice-versa. While we haven’t seen an uncooked Impossible Whopper in person, photos of the Impossible product online look like the real thing, right down to the reddish hue caused by the same molecule, heme, that gives blood its red color. Only this time, the heme is derived from plants. The burger itself is made of textured and flavored soy, a well-established technology.

The result, when cooked and included with all the fixings, is spot-on. BK and its new partner have made the impossible possible. And the great thing is, it costs the same as a regular Whopper! Ours was $5.49 with tax.

While PETA doesn’t like the fact that Impossible tests some of its products on animals, and BK probably shouldn’t cook these burgers on the same grills as meat burgers, the truth is that when you order an Impossible Whopper, you:

Not to mention, you leave more grain for the production of good beer, which is important.

All that’s pretty impressive, given it costs only what you’d spend on a meat Whopper. Now, we’ll admit that the Impossible Whopper may not be as healthy as lean meat, since it has more fats and oils. But here’s the thing: wouldn’t you rather do a little more exercise than eat processed chunks of Elsie, Belle, or, heaven forbid, Mooley Cyrus?